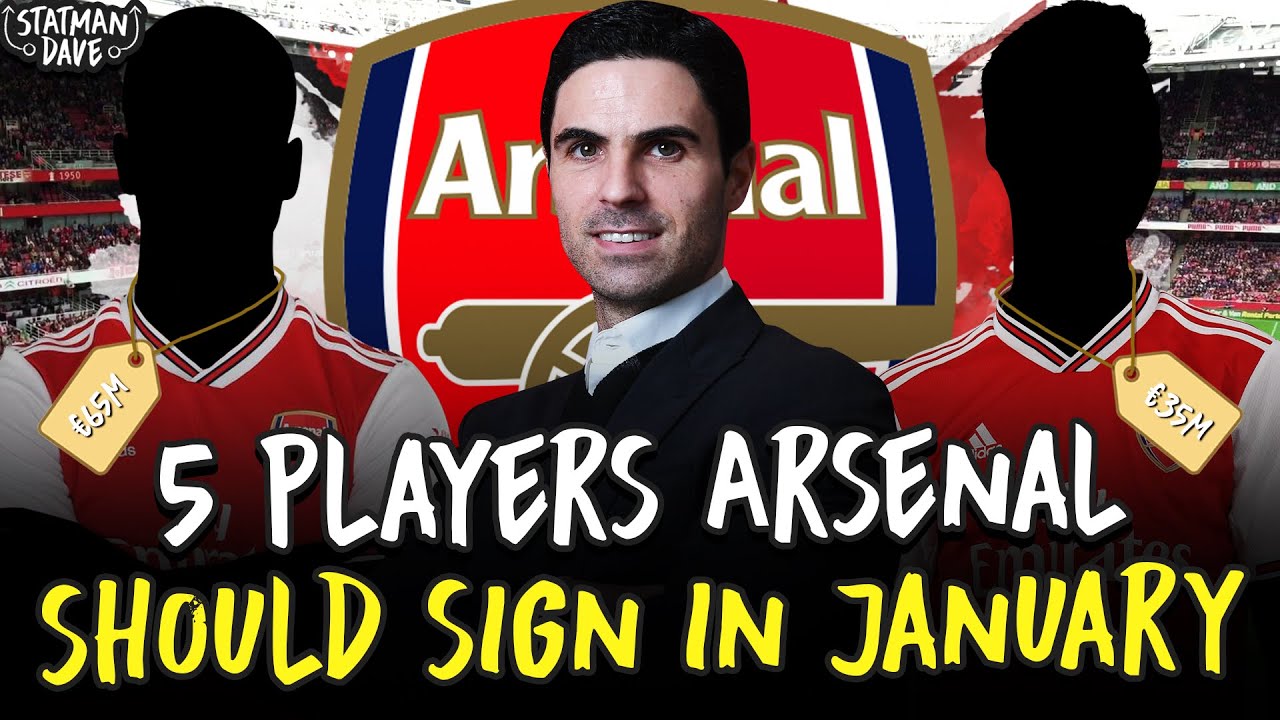 5 Players Arsenal Should Sign – in the January Transfer Window

5 Players Arsenal Should Sign in January. In today’s video we look at which signings could improve Mikel Arteta’s Arsenal in 2020.

Arsenal appointed Mikel Arteta as manager on the 20th of December. After the sacking of Unai Emery, ex-Arsenal player Freddie Ljungberg was hired as interim and results didn’t really change. The hiring of the Man City assistant to Pep Guardiola will certainly excite fans in North London – given the playing style and managing to pick up two league titles on the bounce. Whilst Pep Guardiola is considered one of the best managers in world football for the past decade, the Spanish tactician always spent big since leaving Barcelona for the Bayern Munich job. At Barca, Guardiola had the likes of Lionel Messi, Andreas Iniesta and Gerard Pique – but he’s always spent big since. Guardiola spent an outrageous £200 mill just on his defensive line with the likes of Aymeric Laporte, John Stones, Kyle Walker and Ederson. The point is Arsenal aren’t known for really backing their managers financially and expecting similar results compared to a manager who spent 100s of millions after walking into side which already had names like David Silva, Yaya Toure, Kun Aguero, Raheem Sterling and Kevin De Bruyne – would be premature. So Arsenal will have to bring in serious quality across the pitch to allow Mikel Arteta to bring success to the Emirates.

Defensively Arsenal have always had problems, but we’ve seen it at its worst this season. So defensive signings will be most likely a priority for Mikel Arteta at Arsenal. For me Dayot Upamecano would be a top signing for Arsenal – the RB Leipzig centre back has really kicked on under the tutelage of Julian Naagelsman this season – going from one of the most promising centre backs in the Bundesliga to one of the very best. His ability on the ball is excellent. In the Champions League group stages this season, Upamecano played the ball into the final third 61 times – which was the most of any CB in the competition, with van Dijk in second (54) and Leonardo Bonucci (53) in third.Another good option would be Celtic’s Kristoffer Ajer. Another ball-playing centre back, Ajer impressed in the Europa League as Celtic beat Lazio home and away, ultimately winning their group. He doesn’t have the pedigree of Upamecano, but for me he’d be somebody who could rival William Saliba for that second CB slot or potentially slot into a back three

In midfield and attack Arsenal will still need to bring quality in. Mesut Ozil, Pierre-Emerick Aubameyang, Matteo Guendouzi, Alexandre Lacazette and Lucas Torreira have had their patches of form at Arsenal, but other than Aubameyang we’ve simply not seen any consistency in the past year for Arsenal. I think Ibrahim Sangare would be an excellent signing. The Ivorian is currently plying his trade in Ligue 1 where he plays for Toulouse and was reportedly wanted by Everton as a long-term replacement to Idrissa Gana Gueye.
In Ligue 1 this season, Sangare has played more passes into the final third (149) than any other player – which highlights just how good consistently he’s able to progress the ball from deep. Unlike Granit Xhaka, Sangare has excellent defensive awareness and positioning and is able to reliably win the ball back – he’s averaging a very healthy 3.3 tackles + interceptions per game in the league this season. Kai Havertz could fit manh roles and would be a brilliant signing for the gunners. The German wonderkid is capable of playing on the left-side of attack but is more effective playing as a number ten. Arsenal could accommodate Havertz in a 4-3-1-2, 4-4-2 diamond, 4-2-3-1 or 4-4-1-1 if they want him to play that role and I think that’s definitely what they should be looking to do. The Bayer Leverkusen prodigy has often been dubbed the “next Mesut Ozil” which is mostly rooted in the fact that he plays behind the striker and is German – they’re actually pretty different players. Havertz is a more natural goal scorer than he is a creator. He’s also a willing presser and very versatile – all things that are not true of Mesut Ozil. Interestingly, though, Havertz’ key passes per game (2.3) is higher than his shots per game (1.7) in the Bundesliga for the very first time this season – which suggests that he’s making better decisions and developing the creative side of his game.