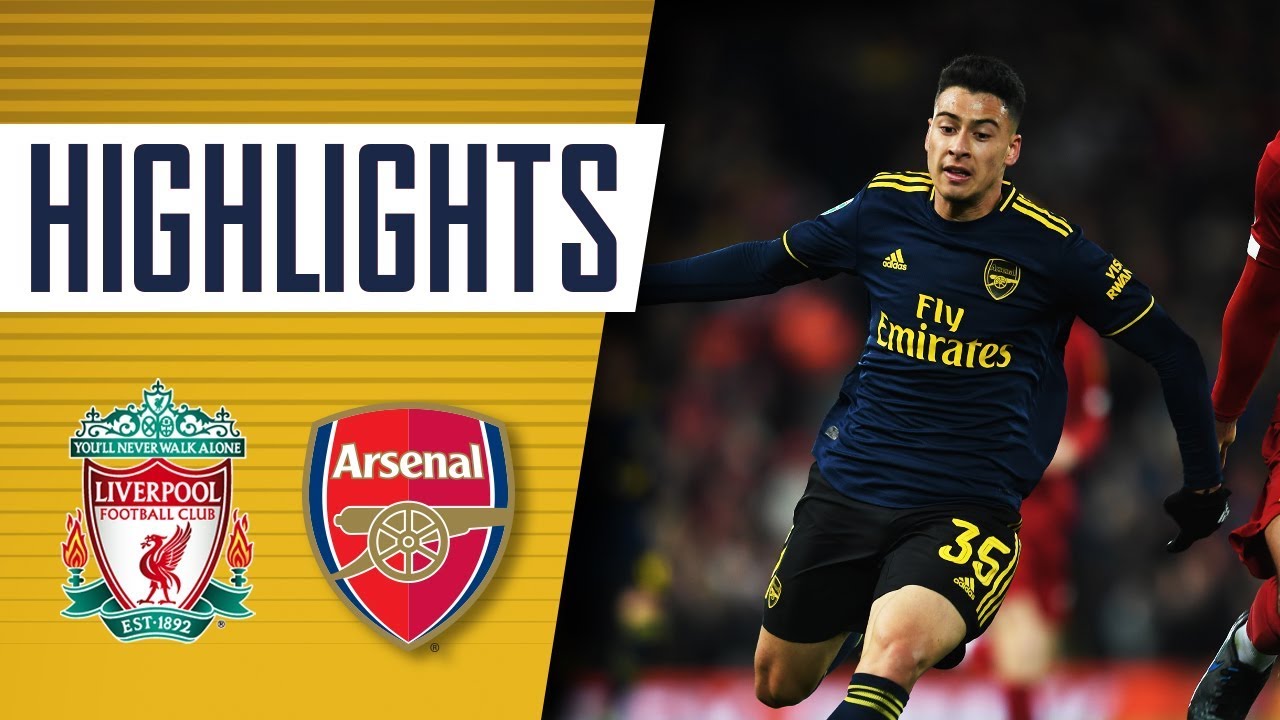 We exited the Carabao Cup after a penalty shoot-out defeat on a night of thrills and spills and non-stop action at Anfield.

Dani Ceballos saw his effort saved in the shoot-out, while Liverpool struck five perfect penalties, but it was a cruel way to end an incredible game – especially as we had led three times, conceding the final equaliser in injury time.

It had started badly, with Shkodran Mustafi diverting the ball into his own net, but just like he did here earlier in the season, Lucas Torreira found the net to equalise, and the goals kept flowing all evening.

Our first was the simplest of finishes for the Uruguayan, who slotted in from close range, before Gabriel Martinelli put us ahead with another close-range finish.

Martinelli’s seventh goal in Arsenal colours – in just his seventh appearance – followed soon afterwards. Ozil hunted the ball down as Liverpool passed the ball out from the back, released Saka and his low cross was slammed home by the unmarked Brazilian in front of goal.

Liverpool hit back before the break from the penalty spot – James Milner keeping his cool after the referee deemed a trip by Martinelli on Harvey Elliott.

We restored the two-goal cushion after the break following good work from Ainsley Maitland-Niles and the lively Mesut Ozil. Maitland-Niles seized on a short Milner backpass, Ozil kept the ball in play at the far post and the English midfielder tucked home on the line.

The goals kept coming. Alex Oxlade-Chamberlain smashed home from 25 yards to make it 4-3, and the Anfield crowd sensed blood – there was still half an hour to play.

Divock Origi turned Holding on the edge of the box to smash home the equaliser, but next it was Joe Willock’s turn to score from long distance.

The game continued at breakneck pace, switching from end to end like a basketball game, and just when it looked as though we had booked our place in the last eight, Origi scored in injury-time to take it to penalties.

This is the Official YouTube channel for Arsenal Football Club. This channel will aim to showcase the personality of Arsenal Football Club and give fans more of an insight into what it’s like to be at this fantastic club. This channel will look behind the scenes and get closer to the likes of Pierre-Emerick Aubameyang, Nicolas Pepe, Alexandre Lacazette, DAVID LUIZ, Mesut Ozil, Bernd Leno, Dani Ceballos, Granit Xhaka, Hector Bellerin, Matteo Guendouzi and more.